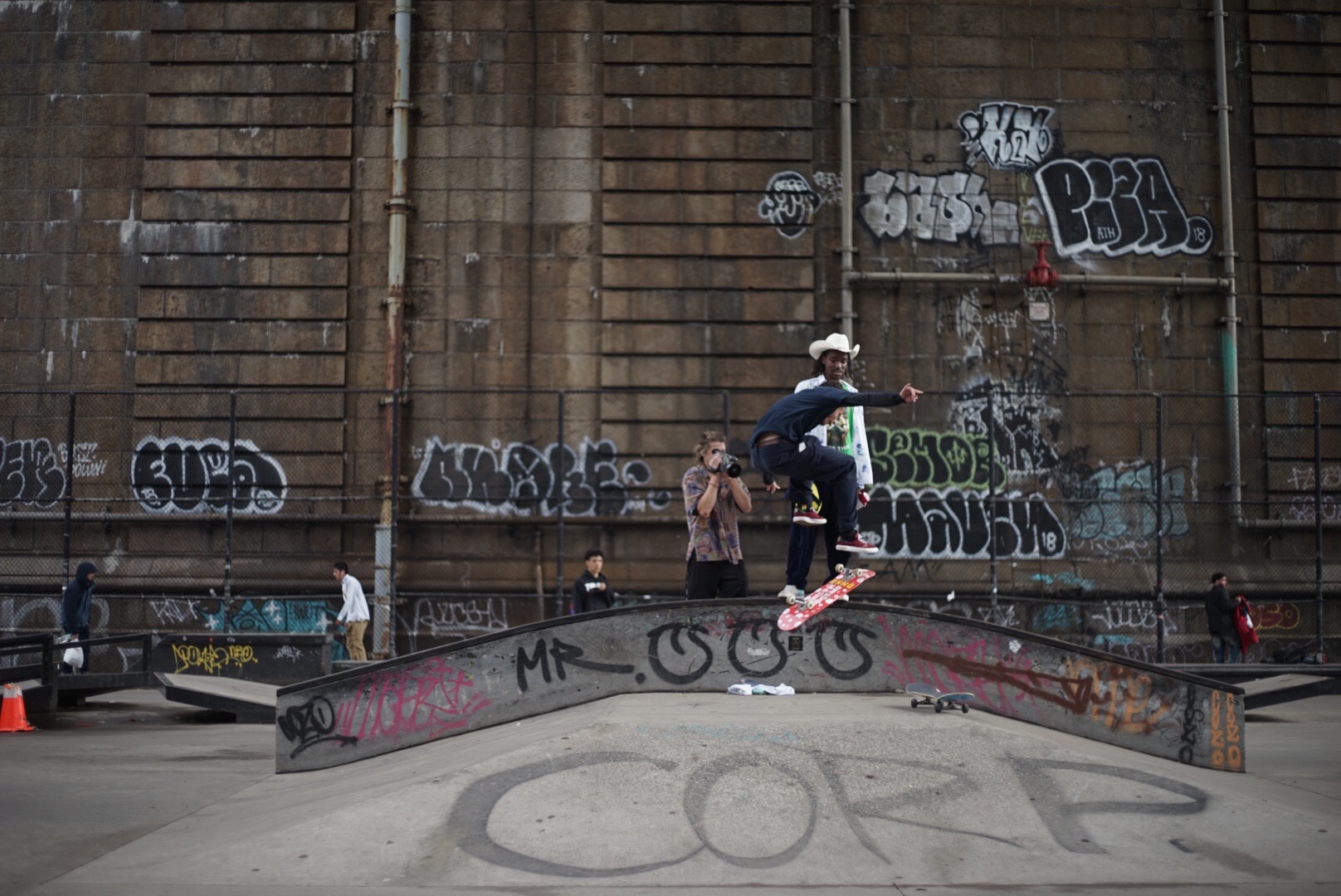 Ok, so it's raining, I'm on the Chinatown bus, it smells, and the guy behind me is coughing up a lung over my shoulder.
As you can imagine I was literally itching to get off this bus. Despite my funky beginnings, the day did start to take a positive turn. As I stared out the window awaiting arrival I noticed a guy walking with a 3:18 STILO bag. For those of you who don't know the 3:18 bag is the most rare STILO bag to date. 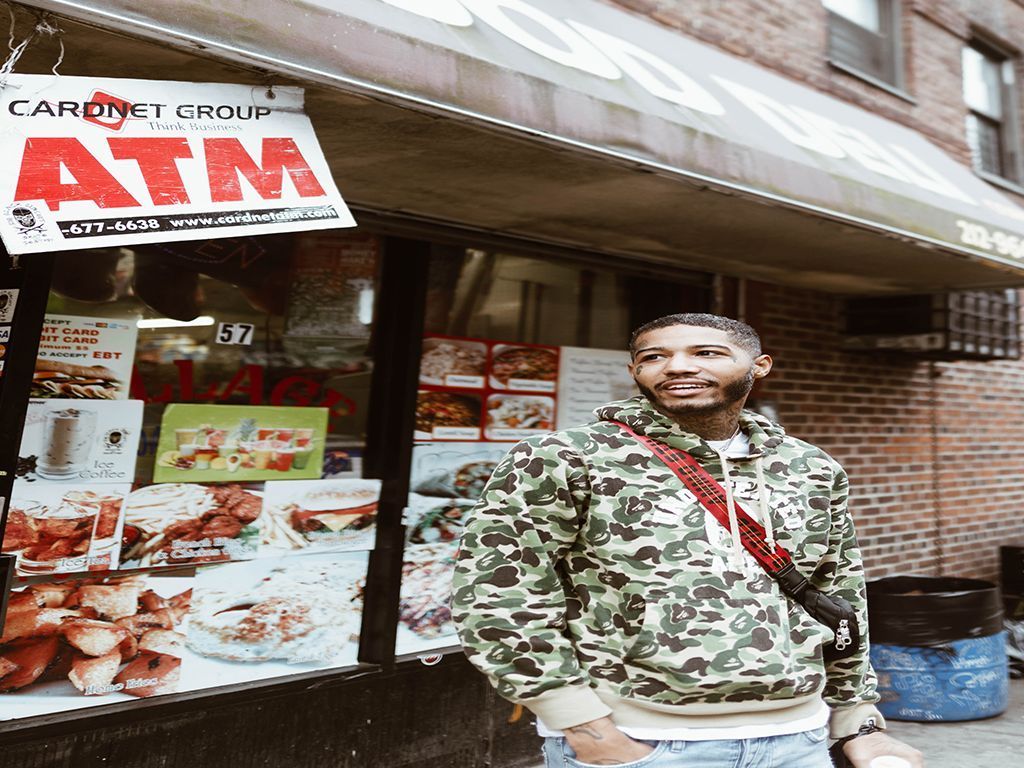 Intrigued by the organic placement of STILO in my universe, I pull out my phone to catch this guy on my IG story. Of course by the time I get my phone out he walks out of viewable range. Luckily, we were finally arriving at the station. I couldn't leave my story lacking so I rushed off the bus for my second chance at capturing at a moment. Salty I was, because once off the bus the 3:18 belt was gone. At this point I gave up on the universe and began to make my way to the skatepark. As I bend the corner I instantly lock eyes with the infamous red strap of the 3:18 bag being worn by none other than Izzle. 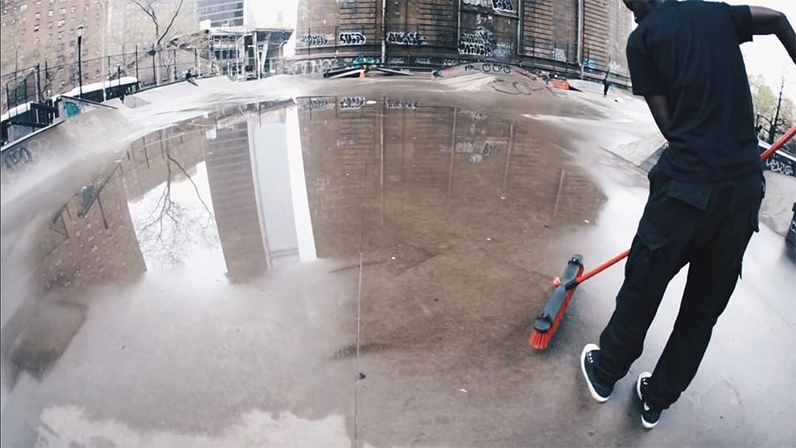 We quickly noticed each other and walked over and said what's up. We talked quickly about what we both have been up to then we were off to the park. As we walked up to the park we noticed that there were people in the park, but no one was skating. Once we got a little closer we saw that there were large puddles throughout the park. The skaters didn't let that stop them though. Both kids and adults teamed up using push brooms to clear the water. While they tried to de-flood the place Izzle and I made our way down the street to the bodega.

We got to the bodega and I noticed a group of what seemed like teenaged kids. I went up to them and say "yo y'all know about STILO?" To my surprise not one of them knew what it was. That moment was bitter-sweet. I was mad at the fact that they didn't know STILO and I was also happy that I had the opportunity to introduce it to someone new. I pulled out a Stilo ski-mask gave it to one of them, gave them all our IG, and walked away. 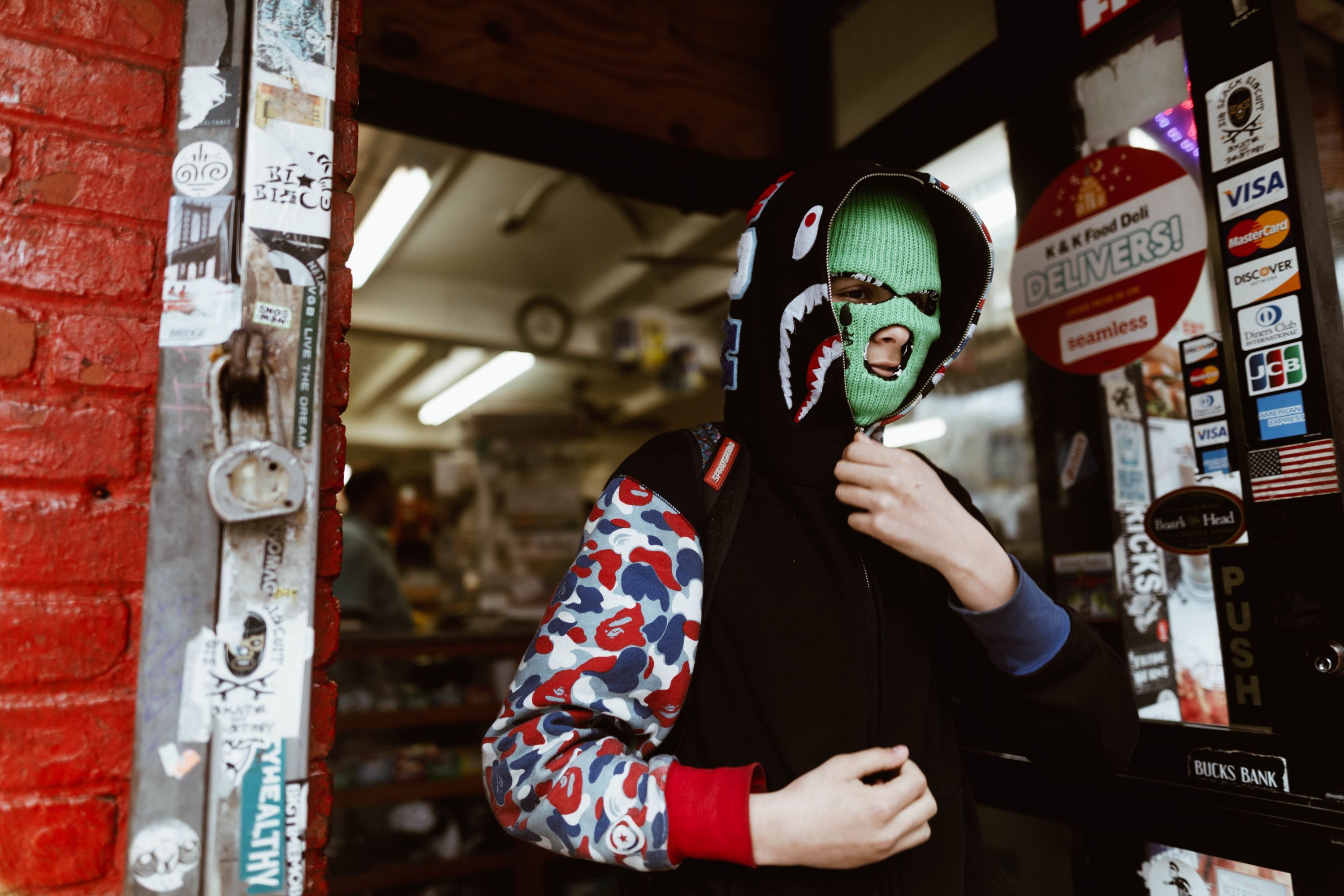 As we stood outside talking and subconsciously wondering if the skaters would be able to skate today the teenaged kids came outside. They walked up, thanked me, & said "Yooo the brand is fire!" I get mushy about this type of stuff, so regardless of how the rest of this day goes my day is already made.

We posted outside the bodega a little longer listening to Izzle tell his story about his acid trip on melrose. Then we took our talents back to the park. When we get there I see that Pretty gang has arrived. To their surprise they arrived to a bunch of puddles.

Reef, the founder of Pretty Skate, quickly dapped me up and introduced me to his friends. Then he was off to work on getting rid of the puddles. Pants rolled and bare footed Reef hopped into the puddle with a stick to try his hand at unclogging the drain. A few stabs and twirls with the stick and the puddle began to drain. About 15 mins of draining and some push broom action had the park looking officially ready for the festivities.

Pretty Skate Jam finally begins! Skaters of all ages, colors, and sizes took off across the park to heat up for the first contest. For the first contest skaters ollied and heel flipped over a obstacle Reef created in hopes of winning a prize. Skater after skater took on the ramp with aggression and confidence, but only a select few had what it took to fly high and land with grace. A tall guy with a curly orange afro took flight and landed a kick flip for the win and the crowd went into a uproar. 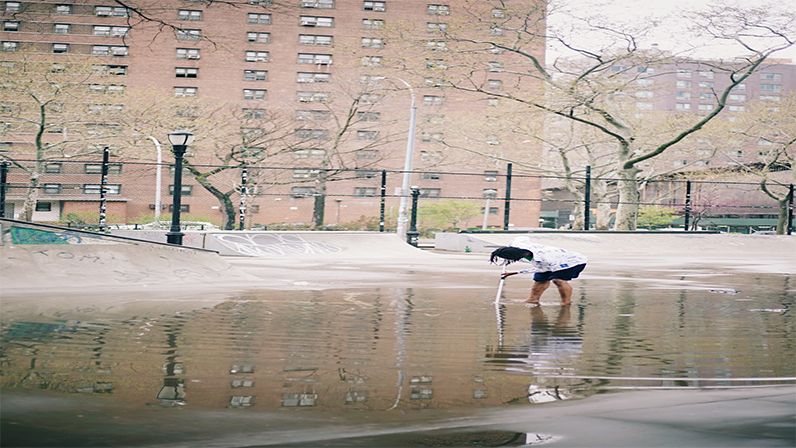 Next up is the skace (skate race.) The event called for racers to skate 1 lap around the park and those that come in first place move to the price round. There were some races where where you hear the loud screams from the crowd because a underdog has made his way from the back of the pack to the front. Then there were others where there were clear winners from start to finish. Despite how they made it to the final round they were there and ready to stamp themselves as the fastest in the park. The final race kicked with Reef climbing the gate and screaming go through his microphone!

People in the crowd were cheering for their friends as they kicked and pushed to the finish.Javan, a skater and rapper from Philadelphia broke out as a clear leader but once at the turn things literally turned left. Another skater creeped up behind Javan and pulled him down by holding on to him during a sharp turn. Javan wiped out as the other skater catapulted him self forward. The race looked like all the skaters were neck and neck until the jump down the steps before the finish. All the skaters took flight, but only one blandly cleanly for the win. Ironically it wasn't the guy who pulled Javan down earlier in the race, I guess cheaters really never win. 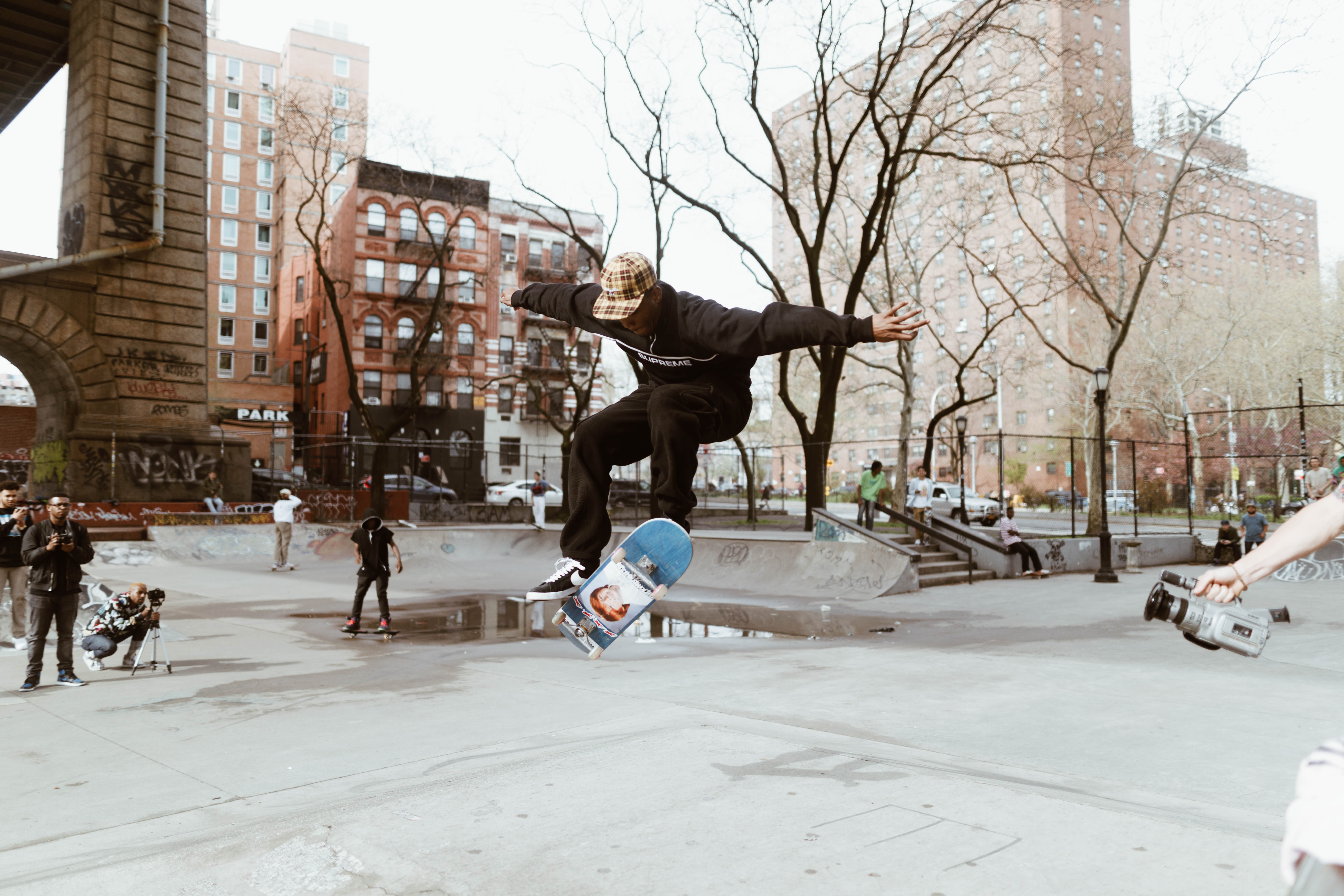 The day continued on in a 4/20 fashion. Skaters began to slow down and people began to stand around and talk smoking backwood after backwood. It got so bad that for motivation Reef began to give out pre-rolls for contest prizes. I imagine those joints packed a punch because they ended up sitting a few skaters down for the count, while others use it as fuel and somehow smoked and skate simultaneously.

As the day began to wind down I noticed many skaters dispersing. Many of their reasons were because they were hungry, so numerous skaters left to get food. We stayed for a little while longer and talked with the pretty gang crew. Then we left and went to a Cuban cafe near by. When we got there we were able to catch the 4th quarter of the Sixers vs Nets game 3 playoff game. After asking the waiter numerous questions about what was on the Cuban sandwich I finally ordered it. Then I enjoyed the flavor full sandwich as I watched my hometown Sixers win in a dramatic fashion.